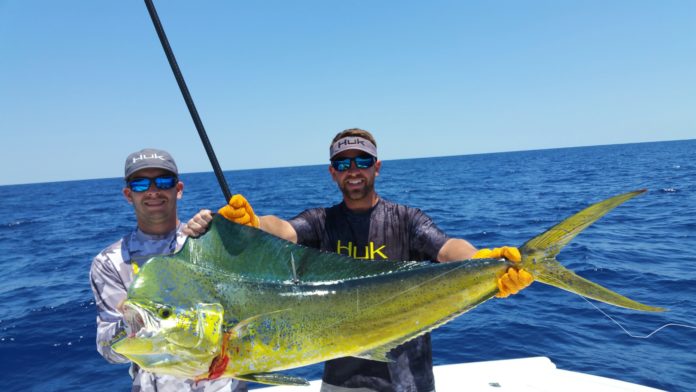 Fishing is one of the fastest-growing sports in the world. It takes those who enjoy casting a line to some of the globes most stunning natural destinations and provides hours of fun and thrills. However, for those in love with the salt, there are very few more adrenaline-pumping experiences than fishing the deep waters off the Florida coast.

Florida is a mecca for deep-sea fishermen (and women). The sheer exhilaration of targeting the many species that are available courtesy of the warm Gulf Stream (in the Gulf of Mexico) is the stuff of fishing legends. The Gulf Stream brings record-breaking fish within reach of the average fisherman – courtesy of some of the best charter operations on the planet.

The choice of just where to fish this incredible piece of water can be a difficult one – there are simply so many fantastic spots. In order to make that decision just that little bit easier, here are some great ‘fishing forward’ areas that will reward those who want to set their hook in a fish that might well be the prize of a lifetime.

The area between Fort Lauderdale and Miami is well known for the quality of its deepwater fishing. Here anglers will be targeting species such as tuna, wahoo when trolling or jigging baits. When the weather is cooler Sailfish are on the fishing wish list. These can be found patrolling reefs that stretch from Miami to the Keys. Bait fishermen who cast a line in the springtime will be targeting Yellowfin Tuna, but there are also an abundance of Blue Marlin, Dolphin and wahoo during this time of year. Fishermen should be ready to change their terminal tackle at a moment’s notice.

The cooler months of the year mean fast and furious action around the Stuart area and in the region of West Palm Beach. Traveling a little further afield to the waters off Melbourne or Cocoa Beach will bring potentially record-breaking Yellowfin Tuna into play. Keep a lookout for birds and you’ll be into the fish in no time at all. Cocoa Beach is also great for Tripletail and Tarpon.

Wreck fishing is the name of the game in this area. Giant Grouper lurk at depths of between 60 and 80 foot. Giant Goliath Groupers can tax even the strongest of fishermen – and there are other species can grow to 300 pounds that will also provide a workout. It’s strictly catch-and-release for the Big Boy on the Underwater Block – take lots of photos before letting any endangered Goliath Grouper’s go free. For a treat head to the beautiful waters of Clearwater where the waters team with Kingfish, Mahi Mahi, Wahoo and Tuna. Go to the bottom when fishing the island waters to target Snapper, Amberjack – and yes, more Grouper.

If champion Kingfish are your game, then head towards St. Augustine and Jacksonville. Here fish in excess of 40 pounds are ripe for the taking. Daytona also delivers – it’s famous for Snook, Wahoo and Redfish. Keep a weather eye out for tarpon in shallower waters – and be ready for a fight.

If you want to take your Florida fishing experience to the next level, then ask the Captain to head 100 miles offshore (from the coast that stretches from Tampa to Sarasota). It’ll need to involve overnighting – but it’s worth the extra day to get to these waters – which are rich in fabulous Snapper and Grouper species.

The deep waters off the coast between Destin (known by many as the ‘World’s Luckiest Fishing Village’ for good reason) and Big Bend are where monsters lurk. Here fishermen will be targeting big Marlin. A knowledgeable Captain is essential, as known fish producing spots are the best bet for getting your hook set in one of these spectacular fish. Wrecks in the area are great for targeting Cobia and Snapper as well as a host of other species.

Florida is renowned for its deep-sea fishing. Its waters play host to an enormous number of species – each with its own habitat and challenges. For the fisherman who loves the idea of putting himself against some truly magnificent denizens of the deep, this is paradise. Head towards the Sunshine State and get your line wet in the rich waters off the coast, it’s a decision you will not regret.

Traveling Around The World in 80 Ways

Top 5 Most Beautiful Beaches In Europe

Top Tips And Tricks To Plan A Private Guided Tour In...

ABOUT US
Travelji Blog specializes in essential Destinations, attractions, lodging, guide with tips and tricks for restaurants & hotels and reflect the full spectrum of a destination mixing old with new. Its all about travel arena.
FOLLOW US
Copyright © 2001-2021 Travelji The Travel Blog